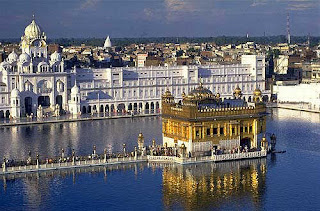 The temple has special religious gravity, at least in my opinion, because the presence of the Guru Granth-sahib, the Holy Scripture of the Sikh religion, the sanctity of which is maintained like that of a living entity. Placed on the Manji Sahib—a throne—you have to be clean, quite modestly covered, respectful, to even think of approaching it.
Capital of the Planet
The Three Soldiers' statue is part of the Vietnam memorial, representing the Whites, Blacks and Hispanics, unified in war.

Like the Prime Minister of Pakistan
I collected all these memories of the colorful dolls, aroma of the south Indian cuisines and Kathakali dancers, the sufi melodies at the Nizamuddin's darga and Tagore, packed them in my luggage and boarded the Samjhota bus. While, I drifted back in the eventful week I had, the police escort again made me feel like the Prime Minister of Pakistan.


Amsterdam on cycle
On finishing a course in the International Academy of Leadership, Germany, we decided to go to Bonn. But on the Cologne train station, we opted for Amsterdam, a better choice, because it is in a new country altogether. And all we needed was a train ticket.


Hong Kong has many villages. Some of them are walled, all of them are
very old and most have been partially or completely demolished. The villages we visited were Cha Kwo Ling ( one of the last squater villages in HK), Tai Wai Village and Nga Tsin Wai Tsuen. Out of this only Nga Tsin Wai Tsuen was walled.