A couple of weeks ago, after the high-profile acid-burn victim Fakhra Yunus committed suicide, Javed Chaudry wrote an appalling op-ed for the Daily Express.
Fakhra Yunus was a young woman with ties to the red–light area of Karachi, mother of a son and wife of a politician Bilal Khar who burnt her with acid in 2000.
The article titled “Chala Goli” (Shoot) starts with a very macabre description of what happened to Yunus’s face, something that reminds one of Scream 2. Such vivid description, which otherwise adds appeal to the article, appears very grotesque here because Chaudry is sensationalizing Fakhra’s misfortune. The details are indeed agonizing. In the same paragraph he praises Khar for his “beautiful foreign clothes, excellent shoes and he had degrees from a reputed British university.”
Read More:
at 2:48 AM No comments:

About a fortnight back, Bilawal Zardari and Rahul Gandhi re-discovered each other, though not much to the world’s surprise. There are old family links, a political dynasty with a bloody past and political careers (that are not taking off) in common. The boys are also very young, spent their time studying abroad, and lost a parent to murder.
The parties they come from are also very similar. Both the PPP and the Congress are socialist, like to give popular statements about the poor (without doing much), like to sound secular and pro-minorities because they want their votes (though can’t do much for them either) and ruin everything economic.
Read More:
at 11:47 PM No comments:

The last few weeks have seen a shocking increase in the Shia killings in Gilgit Baltistan and Balochistan. According to the Human Rights Watch, some 275 Hazaras have been killed in Balochistan since 2008. In the last ten days, some 30 Hazaras have been gunned down. No one has been charged with these crimes
There was no legal or political support to Hazaras after the September mayhem, in which some 30 Hazara men were removed from a bus in Mastung (near Quetta) and shot dead. The daily Dawn called it “descent to a new low”.
Read More:
at 1:40 AM No comments:

President Asif Ali Zardari visited India recently, the first Pakistani President to do so in seven years. However, the positive vibes expected at home could not materialize because of the Siachen tragedy. The avalanche which cost us around 120 soldiers, forced many people to question the timing of the presidential visit, arguing that President Zardari should have stayed home and focused on relief efforts in Siachen.
This argument seems defective. Yes, he took forty odd members in his delegation, including some government members, but this isn’t enough to make the country dysfunctional. The Leader of the Government- the Prime Minister- was present along with other key members of the cabinet and parliament. There are mechanisms to deal with in the President’s absence.
Read More:
at 7:54 PM No comments:

To all the Pakistani Brides about to marry Americans 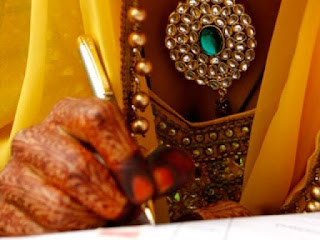 A few days back, a rather naïve blog appeared on Tribune’s website, posted by a would-be Pakistani American bride of some American Catholic.
My heartiest congratulations to the couple but the post seemed very inappropriate. I don’t understand why she thinks it is a big leap anyways, because Pakistani women have been marrying foreigners, and even out of religion, for ages now. Her case is particularly run of the mill because she and her man are based abroad and like most Pakistanis, she is converting him to Islam.
Read More:
Read more »
at 12:04 PM No comments:

TNS fittingly nicknamed PIA as “Problems in Air”, last year. I chanced to travel by PIA recently and indeed, it is neither short of passengers nor problems. I have not travelled far and wide but so far only PIA planes shake and wiggle like an old Suzuki on the bumpy GT road to Mandi Bahauddin. A few days ago, there was this funny news about some passengers travelling in the PIA toilets, with the consent of the on-flight staff. I will explain later why the toilet isn’t a bad idea.
Read more »
at 8:05 AM 1 comment:

Hafiz Saeed, the “Amir” of Jamaat Ud Dawaa (JUD) is India’s most wanted man. The JUD is a charity organization banned in Pakistan for its alleged ties with Jihadis and Al Qaeda. Saeed is also one of the founders of Lashkar-e-Taiba, one of the deadliest Jihadi outfits around with the motive to free Kashmir from the Indians.
Saeed holds a double masters from the Punjab University (he served the Islamist vigilante-Jamiat there), spent 25 years at the University of Engineering and Technology (UET), Lahore, and eventually got training in Saudi Arabia (the wonderland for Jihadis). Saeed was initially opposed to make on-screen rappearances but has changed his opinion, now.
Read More: