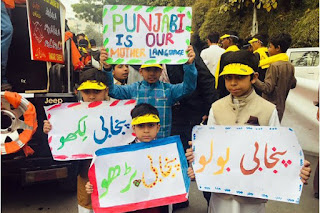 We had all gathered in front of the Lahore Press Club, on the foot of the Shimla Hill, and we were Dehaar). We were almost a hundred people – men, women and children who wanted to implement Punjabi as a compulsory course from primary school onwards.


The day was too sunny for a February afternoon in Lahore but ours was a spirited lot. There was the dhol that served as the base for all the slogans. A group of youngsters danced ahead of it while one jeep played loud Punjabi pop songs that seemed to drive some people crazy. If someone saw us from a distance, they would probably think we are taking a janjj (baraat or the groom’s convoy to the bride’s home) in Gujranwala or Gujrat.
Punjabi is otherwise the tenth most commonly spoken the language on Earth, and it is the third or fourth most spoken language in countries like India and Canada. Nevertheless, it is a dying language because across the diaspora, more and more Punjabis are choosing to speak, read, write and promote Urdu, Hindi, English or French instead of their own mother tongue.

Photos by: Ammara Ahmad
Punjabi as a language suffered the most from the 1947 Partition and Pakistan movement. Not only was the province divided, but one half of the province embraced Urdu instead of its indigenous language, for official and cultural purposes. Today there are dozens of TV channels, publishing houses, film productions and creative individuals working to promote Urdu or arts in the Urdu language whilst Punjabi clings to its few dozen poets, writers and publishers dispersed across the diaspora and struggling to make ends meet.
Where is the largest Punjabi population on Earth? Pakistani Punjab. Is Punjabi taught at the school level here? No. Is Punjabi promoted here? Yes, but in isolated pockets. They need financial assistance and more marketing. Above all, these authors, poets, and artists are mostly old or middle-aged. Where is the younger crop?
The first Punjabi International Conference was held at LUMS a week before the march. The majority of the speakers and attendants were old. Most of the audience was too. Some of the younger moderators couldn’t speak the language or had no clue about the literature being discussed.
Discuss these issues with any Punjabi poet in a poetry recitation in Sahiwal or a conference in Government College Lahore – and he or she will outline the reasons for Punjabi’s decay. The British preferred Urdu and made it an official language because their own personnel were well-versed in that language. However, seventy years on, little has been done to promote the language or, now, even save it from extinction. The pop culture of Pakistan, which was Punjabi till a decade back, is now purely Urdu. And the irony is that though Urdu is not a foreign language but an indigenous language that was endorsed by the British colonisers, today even Urdu is facing a threat of extinction thanks to English and the forces of globalisation.

The demand is clear – Make Punjabi Compulsory from first class to BA
There is indeed a lack of pride and an inferiority complex at play. Punjabi parents regularly work hard to prevent their children from speaking or even hearing Punjabi. The current generation (to some extent even myself) is the first one since 1947 that doesn’t even hear Punjabi as often. There is no dearth of content to watch or read in Urdu and English, thanks to private TV channels and the internet. Today, it is easier than ever before to block Punjabi completely out of your life while living in the heart of Pakistani Punjab.
However, several experts and reports by the UN state that children learn most quickly and effectively in their mother language. Remember your Maths tutor or History lecturer who taught or remembered every date or figures and tables in Punjabi? Was he or she not faster and more accurate than his or her “English-speaking” counterparts?
“This movement to promote Punjabi as the mother language is a part of an international movement because learning in one’s mother language is more effective than in adopted languages,” says Punjabi poet Mazhar Tirmazi. “However, a protest is not enough and we need to approach it the way the British do. We need to lobby, meet politicians, sitting ministers, and MP and present to them our case to build some pressure.”

Dr Anne Murphy, an American historian, with local Punjabi activists
Tirmazi also fears that the new generation has no experience or memory of the Partition – therefore it also lacks an understanding of the tragedy of Punjabi.
During that week, some important sociological issues were discussed in the several meet-ups, conferences, readings and recitations held across Punjab. First was that Punjabi cannot be left to the masses alone. The lowest class of the socio-economic ladder that still speaks in Punjabi is more invested in financial stability and leaves Punjabi behind as soon as it can enter a college or land a better-paid job. Their economic constraints do not allow them to prioritise their heritage or culture. The Punjabi elite or the educated upper middle class will have to chip in. Punjabi poet Mahmood Awan repeatedly said that a “top to bottom” approach will have to be adopted.
Secondly, writer Gurmeet Kaur from the United States brought and read to several school and college students her book of folklores in Punjabi. The book is called Fascinating Folktales of Punjab and is in both Shahmukhi and Gurmukhi scripts. Kaur illustrated everywhere that we need to actively pursue Punjabi in our households to ensure that our children learn it – otherwise, they will automatically speak the most prevalent language which is usually Urdu, Hindi or English. Kaur says she gradually and very consciously drew herself and her children into her mother language, through storybooks and poems. She gently forbids them from using any other language in the house and even taught them to write in Gurmukhi.
Now she is learning Shahmukhi to teach her daughter. Eventually, when she couldn’t find a good storybook for her little girl, she wrote a few herself. But her message was clear and far-reaching – teach your child Punjabi or the child will embrace the dominant language.
Lastly, painter Akram Warraich stated to an almost full audience at a poetry recital at GCU that he stopped responding to his son if he spoke in Urdu. The child learned from a young age that if a reply is needed, Punjabi is the way to go. These remarks often sent the halls into stitches.
The protest on the International Mother Language Day was a tad bit too festive to be taken seriously. Some of the young protesters didn’t even know what the marchers were demanding.
We walked slowly, behind the trucks and jeeps, towards Charing Cross on the Mall Road. T
As compared to this one, there was a group of visually impaired protesters nearby, which was sitting there solemnly, having blocked the road. They seemed to be in a better position to get their demands fulfilled as compared to the merry crowd of Punjabi lovers.
Amarjit Chandan, a poet now based in London, was also discontented with the march.
“There is little evidence that anything will come out of this protest,” he said. “We need to ask the government seriously what is the policy it is making and what are some of the issues that it is facing when it comes to teaching Punjabi at the school level.”
Government officials who were approached didn’t agree to talk on the record. They, however, said that the government has set up a committee to look into this issue.
But not everyone was displeased with the protest.
“This was not just a protest but also a celebration,” said poet Mushtaq Soofi who is also the President of the Punjabi Adabi Board. “This was our cultural expression with music and dance. We must teach Punjabi at the school level for the poor man’s child sake. The rich can access English while the poor struggle because they speak their mother tongue. Their understanding will improve and they will become brilliant students. “
Soofi believes that a nation and its identity is based on its mother language and not the language imposed by the coloniser. Therefore we must teach Punjabi to give the children a sense of self and pride in their own roots and culture.
Eventually, the convoy of protesters stopped at Charing Cross which was blocked by the police from both sides and faced Punjab Assembly which will eventually do the decision-making. After brief and impassioned speech, the speakers came off the truck. There were typical Punjabi slogans like “Saada haq ju nahi deinde unah di aisi di taisi” (those who take away our right will face the consequences) complete with the aggression and sentimentality that Punjabis are well-known for. Slowly, the sweaty and tired crowd dispersed on Charing Cross, most of us stopped by the many hawkers selling street food while the others sat on different vehicles and drove off. The main truck of protest had a tough time reversing and moving out of the flood of frantic Punjabi protesters. Meanwhile, the Punjab Assembly nearby went on with its proceedings in Urdu and English.
This piece was first published in The Friday Times.
at 7:20 AM