Replug: From Jhang to the frontiers of human knowledge 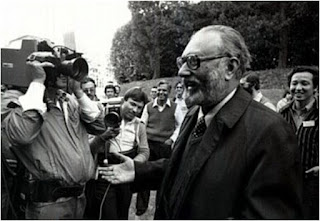 Dr. Abdus Salam was born and raised in Jhang, a small city in the centre of Pakistan’s Punjab province and his mother was from the district of Gurdaspur, now in Indian Punjab. His family was far from wealthy but valued education. Unsurprisingly, he went to a government school in Jhang and was an ace student.


Mubarakan Begum from Jhang was his niece as well as his sister-in-law. “His mother woke him up at three in the morning for prayers,” remembers Mubarakan Begum. “After that, he would study – mumbling and reading under the lantern at night. He used to massage his father’s feet and discuss the day’s events. Since our house was across the street, we could see him through the window at times.”
She also remembers that he returned to Jhang Government Degree College on a Juggat Baazi (quibbling contest) and mentioned the Borh tree (banyan) under which he used to study. Dr Salam asked an Italian institute to give the Jhang Degree College a lab, in exchange for which he would teach there for a certain number of hours. Later in life, he would help anyone from Jhang and gave students from there scholarships to study abroad. He was clear: if there was a student who deserved a stipend, he wanted to ensure that they got it.

“He always wanted to leave room for imagination”

“He was in love with Jhang,” says Nisar Ahmed Shams, Dr. Salam’s grand nephew and an educationist in his own right. “He wrote an education policy and gave it to the Pakistani Government. He gave funds to Jhang Government Degree College for a separate block for Physics, named the Muhammad Hussein Block, after his father. Last I heard of it, they were taking MA English classes there. We still wish they had a chair named after him. Whenever he came to Jhang, he loved speaking in Punjabi and local foods – especially gurh wali mithai and lassi. When my mother went to see him for the last time, he was in tears when he asked about Jhang.”
Professor Salam topped his matriculation and started studying Mathematics and Physics at Government College Lahore (GCU) – a university where he would finish his post-graduation and eventually return to teach at. Today, GCU’s Physics department has a chair in his name.
Mubarakan Begum also visited Dr. Salam when he was studying in Cambridge:
“People, and especially girls, wanted to meet him often at Cambridge. He would request a friend to lock the door, which could only be unlocked from the outside. He would later throw the key out of the window for someone to come up and open the door. Eventually, he grew a mustache to shoo the girls away. I told him to remove the mustache or I would cut it when he slept!”

Dr. Salam researched Quantum Field Theory (QFT) – crucial work that laid down the framework for Quantum Electrodynamics, a field that deals with how light and matter interact. Meanwhile, Mubarakan his niece used this as an opportunity to prank him.
“As his sister-in-law, I used to prank him a lot. One day, I took a dish covered in a cloth for him. He was pining for Indian food, so he thought there was some delicacy there. But he was annoyed to discover only scissors in it!”
Dr. Salam’s grandfather was a religious scholar and physician. Therefore the family had a spiritual streak that Dr. Salam never lost touch with. He kept the Quran near him and told his niece that “he discovered the secrets of the Universe” on each page.

Winning the Nobel – seen here with Queen Silvia of Sweden
The now late Dr. Riazuddin from the National Institute of Physics was Dr. Salam’s only student who studied at GCU and then later at Cambridge with him. Though he had received a scholarship from the Government of Pakistan, he got into Cambridge only when Dr. Salam agreed to advise him on his doctorate. Eventually, Dr. Riazuddin also gained international recognition as a scientist.
“I was a student of Masters in Mathematics at the Government College in 1951 when Dr. Salam returned after doing his doctorate from Cambridge and a year of advanced studies in Princeton,” said Dr. Riazuddin during a phone conversation some years ago. “Professor Salam introduced new concepts that were not there in the textbooks. You couldn’t understand them unless you worked hard. But if you did work hard, there was no limit to the benefits.”
During his dissertation in Cambridge, Dr. Riazuddin had to work even harder because Dr. Salam was very demanding and eager to see his students excel.

With Zulfiqar Ali Bhutto
“Whenever I went to see him, he was busy in calculations but would leave it all to discuss my dissertation and then continue working again.”
Dr. Salam worried about the science education gap between the developing and the developed world. He continually asked the Pakistani government to spend more on science education.
Dr. Riazuddin stated that Professor Salam started feeling intellectually isolated. The research centers were active in the West, and he couldn’t contribute to physics unless he joined them. But on the other hand, there was his homesickness. This was a conflict that he lived with for the rest of his life.
“Dr. Salam suggested during the International Atomic Energy Annual Conference to form the International Centre for Theoretical Physics in Italy,” added Dr. Riazuddin. “He wanted students to study there and return to their institutes to initiate research without making the kind of sacrifice he had to.”

At Cambridge he grew a moustache, according to him, to keep young women away
Another illustrious associate of Prof. Salam is Dr. Ishfaq Ahmed – a renowned physicist who led Pakistan’s Atomic Energy Commission (PAEC) to accomplish the country’s first public atomic test.
“I was a lecturer, and he was a full professor, but I learned more from him than I did from any teacher of mine,” says Dr. Ishfaq Ahmed. “He was in the Mathematics department, and I was in the Applied Physics Department. Dr. Salam was an external examiner, and I was an internal one. I used to set the exam paper, and he would insist that the paper be new each time. We solved the papers together before the students did, discussing and amending them to ensure that students took a balanced exam. He always wanted to leave room for imagination.”
Eventually, Dr. Salam went into theoretical physics while Dr. Ishfaq Ahmed joined the Pakistan Atomic Energy Commission (PAEC) – and that, too, on Dr Salam’s insistence. They also discussed religion, and Dr. Ishfaq told him this is his “blind spot”. But Dr. Salam said this belief was something he got from his father.
“Dr. Salam got a scholarship to Imperial College,” says Dr. Ishfaq Ahmed. “I asked him to stay back, but he said he felt isolated here.”

The research centers were active in the West, and he couldn’t contribute to physics unless he joined them. But on the other hand, there was his homesickness

Dr. Ishfaq thinks that Dr. Abdus Salam’s students are still around and doing tremendous work. “The Nathiagali Series of Seminars on Physics and Contemporary Needs was a series of seminars Dr. Salam started and he used to bring many Nobel laureates to Pakistan. This series is perhaps his greatest gift to Pakistan.”
Abdus Salam married twice and had six children – four from his first wife Amtul Hafeez Begum and two from second wife, Dr. Dame Louise Johnson.
“One would say that the biggest motivation and passion in his life was the inequality between the lesser developed and developed countries,” says his son, Ahmed Salam who is based in London now. “Now that he is dead, the world has moved more in that direction than ever before. He would treat a Head of State, and a simple person on the street alike. He would only fly in economy class. The Pakistani High Commission always sent a car for him to travel in and he ensured that the drivers ate before he did.”
Ahmed Salam adds that his father was “incredibly motivating” and took an interest in his schoolwork. He even helped in preparing for the next day’s lessons. However, Dr. Salam was also inevitably busy and away on trips. His son used to take his bedding to his room and sleep on the floor when he returned because he had missed his father so much. But of course, he also got a present that had a story about it, like calligraphy from China or jumping beans from Mexico. He also insisted that his son, too, had to become a scientist. Little Ahmed Salam had to complain to Sir Muhammad Zafarullah Khan, the first Foreign Minister of Pakistan and a friend of Dr. Salam, who requested the latter to let his son be.

Dr. Salam with Dr. Riazuddin
His son also regrets that Dr. Salam had to leave Pakistan and reiterates that his father always considered this a sacrifice.
“He wanted to initiate projects for improving agricultural output and a nuclear industrial base for peaceful purposes,” Ahmed Salam adds. “But all this was aborted in 1973 when his religion became a problem, and not because someone else had a better idea.”
As is famously known, Dr. Salam was from the Ahmadiyya community, which was declared non-Muslim in the 1973 constitution.
The subsequent discrimination by state and society against the Ahmadi community disheartened Dr. Salam to the extent that he removed himself from the public scene in Pakistan.
Ishfaq Ahmad recalls that Dr. Salam was unsure about how he would be treated in Pakistan after winning the Nobel Prize, and so he went to India first. However, military ruler General Zia-ul-Haq made him a state guest, awarded him the Nishan-i-Imtiaz and gave him the protocol level of a Head of State. A private plane was at his disposal and an honorary doctorate was granted to him by Quaid-e-Azam University.
“I had the duty of staying with at all times during these celebrations,” says Dr. Ishfaq Ahmed. “The last time I met him at a seminar in London, he was writing with his fist awkwardly clutched around the pen. He joked about this new style of his and also appeared to be a little agitated.”
Later Dr. Ishfaq found out that Dr. Abdus Salam had Parkinson’s disease and was losing control of his muscles. The last time he was in touch with Dr. Salam was through the phone.
Dr. Salam was on bed rest and surrounded by poetry books. Someone read him a verse by Saadi, and he showed his disagreement and pointed towards Hafiz with his eyes.
Mubarakan Begum remembers that Dr. Salam preferred silence and didn’t allow the children to make much noise. His home in London was full of medals, books and even poetry dedicated to him by some poets of Jhang. He had an eclectic collection of books that he had collected from all over the world.
“Today, they have even removed his picture from the lab he established in Jhang Government Degree College,” says Mubarakan Begum. “The Government has taken charge of his house, and now even the bricks of that house have been stolen by people. His funeral procession couldn’t pass through the main highway from Chiniot and remained a quiet and tense ceremony…”
This piece was first published in The Friday Times.
at 7:00 AM