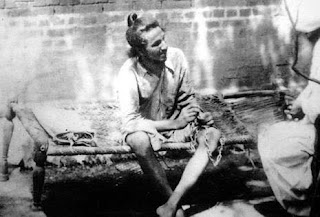 Two days before my grandfather died, we brought him home from the Punjab Institute of Cardiology (PIC)which is located on Jail Road. The Jail Road is named after the Central Jail Lahore, where Bhagat Singh was imprisoned. And behind the PIC is the roundabout where Bhagat Singh is said to have been hanged. Our car stopped at that roundabout to get some fruits and my grandfather once again narrated his favorite tale of heroism, this time in his weak, sickly voice. The story of a young Bhagat Singh who inspired everyone in pre-partition India. Most people now don't understand how atrocious and organized the British were in India, and how Bhagat Singh's unapologetic and brave reaction energized the Indian Freedom Struggle.
Today is Bhagat Singh's birthday and I mourn him, my grandfather and the fact that Pakistan couldn't do as little as name a roundabout or road after him.
at 12:53 AM No comments: