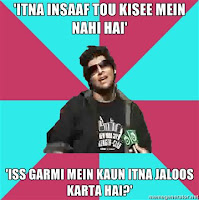 Two days back, a video of a well-provided but confused kid arrived on facebook. The boy starts of with saying that "We are all good people shouting slogans and our police is pushing us. For whom? Raymond Davis- an Englishman?"
He adds that our women observe parda at home but came out for the revolution today, just for all of us and our country and that Imran Khan up there is so moneyed thet he doesn't even need to do all this. Behind this maverick, you can see the flags of a religious party floating.

Now the funny part is the phrases he picked up to express himself:
" Police humein marey gi tu hum inqilab kaisey lain gey?" "If the police will beat us, how will we bring a revolution?"
" Itni garmi mein kaun jaloos kurta hai!" “Who gives processions in such heat?”( Sounds like peeing)
" Jab inqilab ki zaroorat hoti hai, sara banda nikal aata hai!" “ When we need a revolution, the whole man comes out!”( kya nikal aata hai?)
" Imran Khan uppar khra jalsey dey rehein hain." “ Imran Khan is giving procession up there.”    ( Jalsey dey reha hai ya paani?)
" Yeh merey bhai garmi mein khrab hu gaye..." “ This brother of mine has gone bad in the heat…”( bhai hai ya pudding?)
A Facebook page has been created to celebrate the poor teenager's speech, probably by his school mates.
It is funny enough to give you fits of laughter. One of the posts say: "This Inquilaab is brought to you by 'Pampers'...Garmi mei bhi bachay sukoon se juloos nikalay" 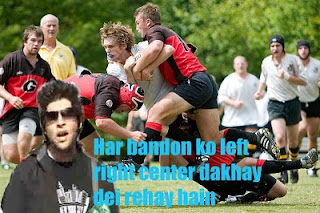 The Middle East has a socio-political upheaval, and seems like some of the countries might become democracies or close to something like that. The semi-literate, quasi-Muslims of Pakistan, with a pick-and-lick, drop-and-run tendency are pregnant with fresh hopes. A fortnight back, I attended a seminar in which a political worker declared that with such high poverty and inflation rates, people will pluck these politicians and hang them with the trees.
I refuse to believe this. Firstly, Pakistan is already a democracy, something the Middle East is still striving for. Plus though ineffective and corrupt, state pillars like the judiciary, media, legislature etc are still operative. So what we are calling a " revolution" will actually be a chaos that will serve certain political parties that cannot come in power otherwise. We better improve the existing system then get used to serve the vested interests of some individual.
Meanwhile you can have fun listening to this musical version of the chappie's revolution:
at 2:11 PM