Pakistan Through the Lens

The following are a couple of photos of Pakistan, available at dawn.com ( very good site if you want to understand Pakistan) 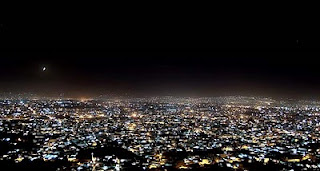 Quetta was where my father was posted for a decade. The city is quite dry and dangerous

The most endangered Species on Earth

There are roughly four types of Muslims available in Pakistan.

The second is the less common but far more dangerous species. These are actually rascals, who like to have a good time on Earth but pretend to be a Muslim. One must wonder why take such pains? Well, being a Muslim in Pakistan is a political agenda. All higher offices are Muslim exclusive. All parties, if not fully support it, at least don't defy Islam. Islam as a business is all profit. Take the example of a Islamic show host on t.v- the chap with fake degrees. He became a minister ( or MNA) was paid to attend house preaching , recite prayers etc. This was the first new-age glamorized version of religion, we faced. Many Islamic Political Parties, join hands with dictators and gain benefits. This is perhaps not as outrightly unislamic as the corruption they do. In Smaller circles, your reputation is improved by being Islamic (or dressing and talking Islam- a couple of Quranic examples, display of naiki, professing charity etc). Many girls in my school, went into a few years of Dupatta, to get a good proposal. In Pakistani aristocratic families, nothing is more prized then a rich, pious girl, who can flaunt a dupatta when the need arises.

The Third breed is the thoughtless follower. The one who doesn't read between the lines, thinks rationally, takes the blind, passionate plunge when the need arises. This is a large population. And they are equally dangerous... remember, in the 80s, the threats to throw acid on women who don't cover-up etc. This section is often used by the hypocrites ( second breed) to churn out money through militancy and attacking civilians.

The last is the rarest and the most endangered breed of all. The pure-hearted, harmless Muslim, who worships in solitude, doesn't intend to harm a fly and only seeks peace of mind as the outcome of his prayers.

P.S: I am not stating I am holier then thou. This is just an observation.

The Government took my anti-Facebook-photo-parade rhetoric too seriously and blocked the whole site for an infinite amount of time.
I must congratulate everyone, since it has improved our image greatly abroad.

My article was published on Chowk- it's all history and politics:

But its a rage.

My friend Amna came up with a nice post about workplace harassment:

Now here is someone I am very fond of , a journalist and friend, he won the Viewers Choice Award for his poetry film at the Sadho Poetry Fest:

The last week was a prolific one.
I got one good news that the English Speaking Union's Journal will publish some piece of mine. I don't know which. Ravi published my Amritsar piece last year, didn't get the copy till this Friday.
And then three of my articles came out.

On the Downfall of Lollywood:
http://chowk.com/articles/17243

And my travelogue on Delhi ( lovely memories)
http://chowk.com/articles/17250

But I missed my blog as hell , so came back to it!
My article got published in The News in march and I discovered it a month later:

Sanctity of our Past

Facebook has revolutionized our lives. But the website, has almost raped our past and present.
When some friend of mine gets married ( mashallah) they upload a gazillion pictures. In case they are too busy, their friends, can create this havoc.. in fact , the friends are more rampant, since the pictures they load are non-professional, taken in a hassle and without any direct consequences...Even if you look stunning on your wedding day, why do you allow your pictures to be parading around, for free, among countless people whom you don't know and who don't give a damn, except for a general interest in your gender or dress-design. I am certainly not a religious conservative.
The worst comes if they visit a foreign land for honeymoon... then all u see is green beaches for many days to come on your home page. But nowadays, many of my friends are graduating. So you can imagine. Instead of one woman with digital camera , now there are several dozen, celebrating their last days in college. And suffocating us with 12 dozen pictures daily.
One of the silliest delusions FB ( facebook) gives us is that we are in the centre of the cosmos. By renovating our statuses, and uploading those pictures, we satisfy that desire for attention and itch caused by self-love. It nourishes our silly little idea that the World wants to know about us. Many people have statuses like " Sick of these assignments" or married women declaring " you can hurt me as much as you like, but I will always forgive you". To top it, all these relationship status acrobatics, from complicated to engaged to single, only provides fodder for gossip. Most of us have hundreds of people on our lists now. Trust me, only less then a dozen give a damn, or are honest to us as friends. Or may be more then that. But if you are telling me those 200+ people on your list, or those 30 who leave cheesy comments on your pictures are concerned- you are being delusional.
Some years back, we had those family albums, wedding albums, fewer pics that we cherished, but now when our lives are flooded with events, would we preserve and cherish these pictures? Will we think of our past with the same longing , once we have attempted to trap each and every moment through the lens and made it available to public? Some moments are perhaps too precious to be recorded or made public.....?
at 12:45 AM 9 comments:

Cat on a Hot Tin Roof

Just a few days back, my dear friend Rohma was gifted a cat by her smuggler friend (not me). The cat with all it's hair , looked as if it was trafficked from the north pole. After looking at it's catty features, I named her Aishwarya Rai. But it turned out it's a boy. So I named it Shahrukh Khan. But just then MNIK was released, and the irritating little Om Shanti Om was repeated on Geo. As a revenge tactic, I named the cat George Clooney.
Now, that Rohma had a huge cat, I was jealous. My maternal instinct was alive yet wasted. Just that, a stray cat who visited our house often, came back with a kitten. A small ball of cotton that could fit in my palm. (I picked it)
Now the little kitten under a table in the garage was not fond of me. It went further back under the table. My knees produced screeching noises when I bent down and extended my hand to it. Just then the Dirty Mama came. The little one foot high cat now acted like some lion king. And I had to run for my life.
The next day, the kitten, whom I named "Billu 420" was bigger and stronger. It whined when I picked it up- lovingly.
Just then the door opened. And my father arrived.
" You are not planning to bring that in are you?"
" No." I said
I dropped the kitten, who went back. Just then Rohma called. As she told me her romantic cat stories , I saw the cat return and Billu settle down on her back, like Simba. Out of jealousy and vengeance, I now call Rohma's cat "Pattey Khan".
at 8:16 AM 2 comments: